THE ‘SAIGON UNFOLDED’ PROJECT – A MULTIREGIONAL ART PROJECT WHICH QUESTIONS ABOUT CULTURE, NATIONS AND BOUNDARIES

The project is operated under the Asian In/Visible Station project, curated by Zero Station and co-organised and funded by the Asia Center – Japan Foundation and Zero Station.

A. THE ‘SAIGON UNFOLDED’ PROJECT-PHASE 1:

District 8, even during this formative transformation, still retains many of the old Saigon’s vestiges, like depositories, docks and Binh Dong port, to name a few.

The majority of population in District 8 is migrants who came from the North since 1954. This area is being insulated from the central vicinity and there is still a scarcity of urbanization within the region; Saigon, in our definition, is a city of migrants, a social tendency shared by District 8, where Nam Bo (The Southern)’s characteristics of migration have not gone unappreciated. 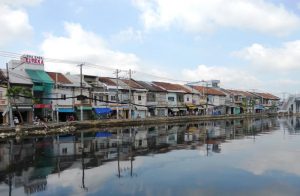 For the organizer, this is a community art project that bends on disclosing novelty and a fresh look towards the communal space, not only in its collective term, but also its intricating overlays of stories both personal and intimate as well. Because this project is a subset of the main project of an In/Visible Asia, with the collaboration between the ZeroStation and The Japan Foundation Asia Center for Cultural Exchange in Vietnam, it is intended as an inquiry toward the unseen and invisible elements existing in any region, especially District 8 with its illustrious particularities.

The project spans from mid-October 2016 to the end of December 2016, which comprises 2 phases: Research and Production.

Two artists selected to participate in this project are from Vietnam and Indonesia. They are introduced through nominations of the Asian IN/Visible Station’s partners’ network and along with Zero Station’s selection and curation concept.

Followings are their profiles and interviews with Zero Station:

The artists present their works and develop their sketches at Zero Station:

B. THE ‘SAIGON UNFOLDED’ PROJECT-PHASE 2

After a great deal of effort and preparation, the ‘Saigon Unfolded’ project had finally come to an unfortunate realization that the hurdles that have been placed in front of us (please refer to the phase 1 documentary of the project), to achieve a license for phase two of the project, are simply too high and we believe that we are unable to move forward with this project in Vietnam at this time. 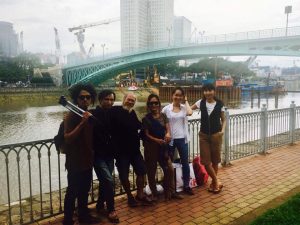 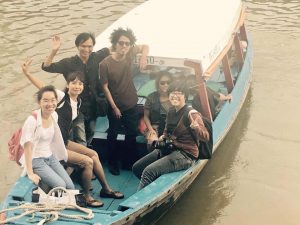 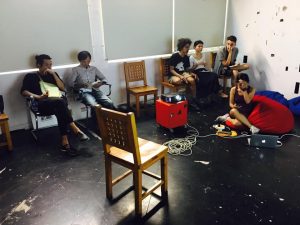 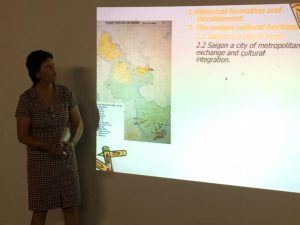 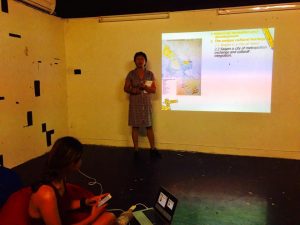 ZeroStation and its partner, the Sports and Culture Magazine have tried different approaches and directions to find an appropriate location for the mural. We contacted the management board of the Binh Dong flour factory (address: 277A, Ben Binh Dong, Ward 14, District 8), where there is a prominent wall in a historical site of District 8 but ZeroStation artists Moki Prihatmoko and Nguyen Quoc Dzung, along with Pham Thi Thu Thuy who is a representative of the Sports & Culture magazine could not obtain a license for this project. The artists did try to develop and modify their drawings to suit the wall’s owner request and yet still fulfill the creative aspects of this project but to no avail.

3 sketch for the wall in district 8, Saigon

Not being discouraged by the first objection, we, the curatorial board looked for another location within District 8, and found a Governmental Primary School named Nguyen Trung Ngan. The school again offered another opportunity for us to create a big mural on its façade and awesome exterior. Everything appeared favorable when the school administrators seemed to be interested in the idea of transforming the surrounding wall of the school into an enormous mural. After getting the green light, the artists started working on their sketches over and over. One might wonder why the artists and curators of ZeroStation spent such great amount of effort and money on this project. The answer is simply because we want to create conversation through culture and art, not only between Saigon and the region but also between artists and the city’s cultural body. Particularly in this project is executed to celebrate Saigon, within its openness, its generous hospitality and its ability to integrate with the world. Because of these values, we insisted on having this project licensed for production. 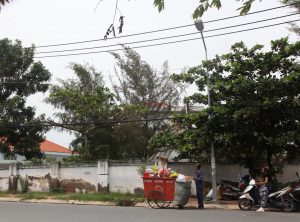 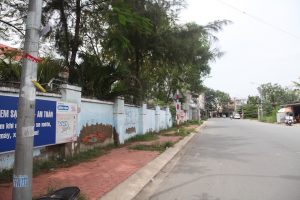 However, carrying the role of a contemporary art space, which means an independent entity in terms of both concept and operation – from the contextual perspective where its existence lies between its independency and criticism – even willing to back down to find ways for the project to be reviewed and discussed, to open up a dialogue, but we also have our insurmountable principles. The fact that there are some principles that if broken – we would not be us, and if so, the meaning of all projects would be zero.

Within those principles, there is the principle of rejection. When the project is no longer a result of a two-way conversation, but only a one-sided imposition. We believed that we must reject the school’s offer to collaborate because of their request to ‘follow their own idea of how this project should be carried out’. Bear in mind that, we proposed a collaboration in which we present our sketch and our explanation, and the school can make comments so that we can come to a final meaningful sketch but also not touching upon any political, cultural or social taboos. However, our offer for conversation, our willingness to adjust, as well as our media and financial support for the entire project were not taken into consideration. The was a one condition imposed for this project to be implemented; “that we must follow their sketch unarguably”, we could not accept this condition.

In this situation, we had to reject the project. Though there is regret for a golden opportunity lost for contemporary art to have a conversation with the government or the state institution in a project which aims to enhance the urban landscape and attract tourists, we must say no when there was no longer a possibility for conversation. The project, if implemented, would just become one dimensional illustration.

However, in terms of geography and institution, Saigon is a finite entity, but in terms of culture and spiritual, it is an infinite possibility. Especially in this era of globalization, it seems that barriers may be broken, even if it’s a political barrier or a cultural barrier. Saigon is simultaneously a historical fact and a fictional, infinite imagination. It is both an immutable existence and endless mutable possibility according to human’s multidimensional interactions.

From this perspective, the project has been re-produced in a better way: instead of being conformed by administrative decisions and one-dimensional cultural thinking, it has become an idea, an imagination, which can overcome all materialistic barriers and appear with a different look in a different place.

The fictional mural about Saigon will now be executed in Yogyakarta. One must realize that this process of transforming, disappearing and appearing is also a new possibility that the Asian In/VISIBLE Station Project brings about. Here, the Asian In/VISIBLE Station Project
shows its potential in re-conceptualizing the regional networking practices or art and cultural practices. Southeast Asia is now not only limited in political or diplomatic premises post (or pre?) Cold War. Southeast Asia has become a potential, a creation, a transhiptment terminal between local and global both in political and social aspects.

Because of the new reality mentioned above about Southeast Asia, the ‘Saigon Unfolded’ project can carry a new meaning. Instead of being a terminal bringing global to local and mobility to residential spaces, now it opens a reversed process, bringing local to global and residence to mobility.

3.The process of executing the project in Yogyakarta:

Compared to Saigon, a megacity, Yogyakarta is a small one. Compared to Jakarta and Bandung, two very modern and big cities, especially Bandung is an industrial centre of Indonesia, Yogyakarta seems like a small town with lots of greenery. However, Yogyakarta is one of the most important cultural centres of Indonesia. A lot of progressive art and cultural organizations gather here, including Cemeti House, KUNCI Cultural Studies Centre, etc. Artist Moki Prihatmoko, who was selected for the project ‘Saigon Unfolded’ as a regional representative, is now working and living in Yogyakarta. Along with Biennale, Yogyakarta is also a home for important community art projects, one of which is Moki’s own project, in which he transformed a civil defence station into a venue for cultural connection between local people.

Looking at these reasons, Yogyakarta has become a promising location for Saigon to re-appear. A mural, is an imagination about Saigon, a presence in culture; in mobility and possibility, when implemented in Yogyakarta, will become a symbol for a new concept about Southeast Asia, something great extends beyond a limited framework. The process of disappearing and appearing of the ‘Saigon Unfolded’ project from District 8 to Yogyakarta is an evidence for a concept and a spirit of the new world, in which walls and barriers are to be destroyed. Perhaps this spirit is precisely what we need to believe in, especially in the time when the spectre of a ghetto doctrine is covering the whole world and bringing back the walls to prevent us from coming together.

From Vietnam, artist Nguyen Quoc Dzung will go to Yogyakarta and stay there for 15 days to work together with Moki on the sketches they have prepared in Vietnam, which is the mural that could not be done. As a result of this project, the mural will remain as a cultural and tourist attraction in Yogyakarta. A documentary about the process of this project will also be produced.

BRIEF INTRODUCTION OF THE LOCATION WHERE THE MURAL IS CREATED IN YOGYAKARTA:

– PRAWIROTAMAN is an attractive tourist area, one of the Indonesia Java International Destination in Yogyakarta.

This area has been an icon of Yogyakartan for its batik business (a traditional cloth dyeing techniques created with wax and print pattern with traditional manual methods) since the 19th century. It is now famous for its lodging and hotel business for the tourists. 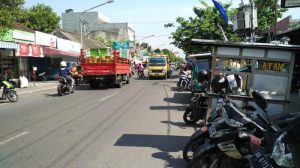 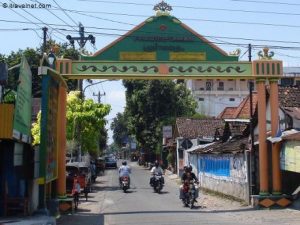 Prawirotaman, for that reason, is found as a great location to celebrate and welcome both local and international artists for their arts.

A mural about Saigon will be painted and it stays here, at least in two years. It will be viewed, enjoyed and contemplated not only from the locals’ point of view but by the tourists and drop-by guests who travel to Yogyakarta as well. Thus, the mural about Saigon in Yogyakarta is in hopes of offering a retrospective conversation regarding arts, nations, nationality, boundaries, culture and emigration in the boom of globalization. This is about a Saigon within Yogyakarta, and a Yogyakarta within its regional domain. Nevertheless, Saigon and Yogyakarta are not separated but forming a never ending conversation about culture. 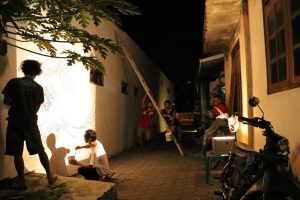 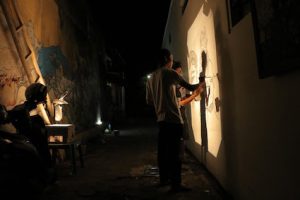 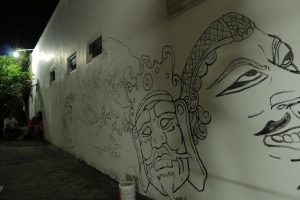 The wall at Yogyakarta

– The production begins from 3rd March to 11th March 2017
– Opening event is on the 12th March 2017 with the participation of two artists who make the artwork, Zero Station’s representative, and invited guests from the local arts spaces.
– The mural is contracted with its owner and will remain in the area at least in two years. 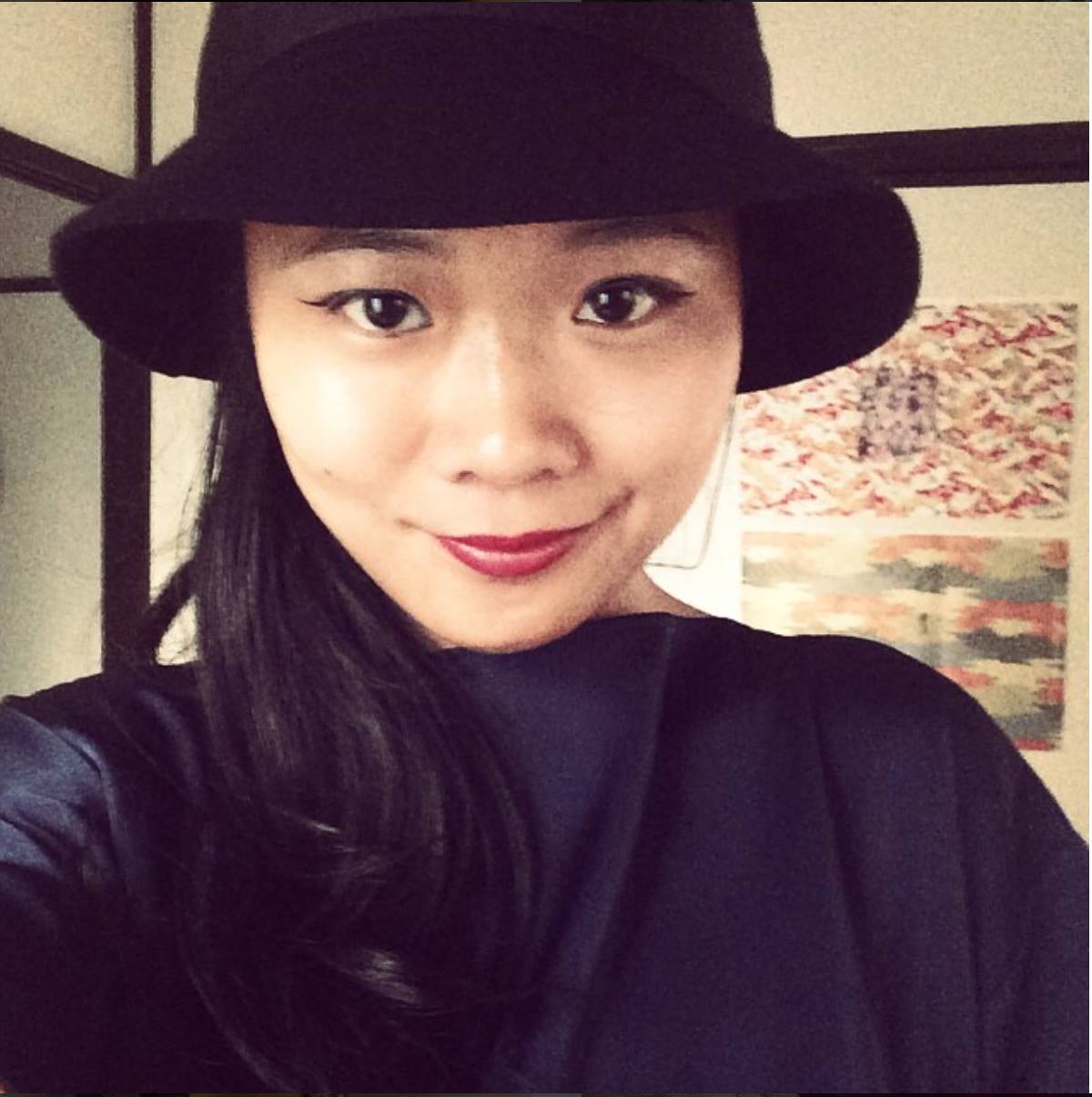