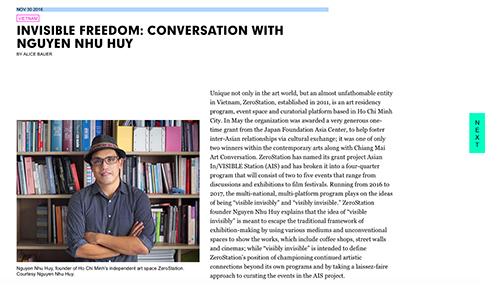 Unique not only in the art world, but an almost unfathomable entity in Vietnam, ZeroStation, established in 2011, is an art residency program, event space and curatorial platform based in Ho Chi Minh City. In May the organization was awarded a very generous one-time grant from the Japan Foundation Asia Center, to help foster inter-Asian relationships via cultural exchange; it was one of only two winners within the contemporary arts along with Chiang Mai Art Conversation. ZeroStation has named its grant project Asian In/VISIBLE Station (AIS) and has broken it into a four-quarter program that will consist of two to five events that range from discussions and exhibitions to film festivals. Running from 2016 to 2017, the multi-national, multi-platform program plays on the ideas of being “visible invisibly” and “visibly invisible.” ZeroStation founder Nguyen Nhu Huy explains that the idea of “visible invisibly” is meant to escape the traditional framework of exhibition-making by using various mediums and unconventional spaces to show the works, which include coffee shops, street walls and cinemas; while “visibly invisible” is intended to define ZeroStation’s position of championing continued artistic connections beyond its own programs and by taking a laissez-faire approach to curating the events in the AIS project.

Bringing together 34 practitioners from Ho Chi Minh City and 19 from other Asian cities, AIS boasts a wide network of artists, curators and spaces that will work in groups to create the various program events. ZeroStation kicked off AIS with a launch party in August, and has just gotten underway with the first-quarter program. I met up with Nguyen Nhu Huy in a cozy cafe just around the corner from the famed Saigon Notre Dame Basilica in the city’s bustling District 1. As we sipped our tra da (iced tea) Nguyen Nhu Huy spoke about his desire for the project to be a catalyst for networking that allows collaborations to grow organically, and also explained more about the maverick nature of the program and the clandestine power of contemporary arts in Asia.

Can you explain the significance of the program name, Asian In/VISIBLE Station?

The idea for the program comes from [Martin] Heidegger—truth coming from theory and consuming at the same time, so truth is never exposed. It’s not tangible but we still see it; we experience its effects. You become aware, but then it disappears.

In Vietnam there is the idea that truth is presented in what is shown at exhibitions, but because the government thinks that way as well, they often censor what is presented. Exhibitions then lose meaning because you have to work with the government, and once the show goes ahead, it becomes political even if that was not the original intention.

What’s the situation with the government and the programs of AIS?

We need to think about changing the rules, an approach ZeroStation can have since we are more flexible than the government. An example can be seen in the ZeroStation flea market. They cannot “capture” a flea market: they don’t have laws requiring permits or specific stipulations for that kind of event the same way that they do for an art exhibition, but in a flea market art and dialogue can happen. Thinking and dialogue can happen everywhere. We structure everything to be conceptual, and if the government thinks exhibitions are the only places where ideas can be shared, then we can find different approaches. This is also the reason why AIS has so many partners. They cannot censor everyone, in that way, we become invisible by being visible.

That depends. We don’t need a license for everything. Artists need to be wiser [in how they exhibit and present artwork]; we see what the government can do, and we don’t follow that route as our way to spread art. Maybe one day the authorities will catch on, but even when that happens, we will find other ways around it.

What do you hope AIS and its events will achieve?

We try to make the structure of AIS as one that can enrich the art scene in Vietnam. The practice of contemporary art here is good, but the theory is terrible. So we’re inviting art critics from across Southeast Asia to come and work with the artists to help them develop [their practice].
What makes AIS distinguishable from other programs pursuing tangible and philosophical goals?

We want the participants to work together and grow organically outside of AIS. AIS challenges the idea of the curatorial, because we don’t just choose the artist and try to produce a specific knowledge of art. The project isn’t giving a specific concept; we just offer support by providing translators, connecting participants with local artists and by providing funding. The concept and topics are up to them, so it’s an experiment because it’s the curatorial as the practice of facilitating. Curating should be a practice that is open to all. AIS allows for further connections to blossom under the radar.

Were there specific qualities in the curators and artists you chose?

There were two criteria we used when selecting the participants; one is that they be emerging, and if they’re well-known, they work in a collective so the focus is on their collaborative productions, the second is that they’re open to new things. At ZeroStation they can do whatever, destroy their identity.

The project needs to be open to the possibility of it being unsuccessful. This is a moment of experimentation, and if they understand that, they can get it. Art in a place like Vietnam can really bring meaning and a positive goal, more than just produce money.

How will the Vietnamese community open possibilities of art in Asia?

This is the first time in Vietnam that we can invite people to come in on a larger scale rather than us going out. It’s not about Asia working together, but about working in a new way. The notions of the visible and invisible are based on realization, sometimes you look at something but you don’t see, sometimes you see, but you didn’t realize. We don’t make the realization happen, but we make the condition for the realization to happen. Maybe now there is more freedom in Vietnam than in the United States. Think about how it is for an artist, you can’t go to a university [in the US] to do something unplanned. Very difficult . . . you need to apply, or be invited, and be able to pay etc., but now [with AIS] artists go to universities and have discussions with the students; it’s the new realization about freedom, about contemporary art, and the meaning of contemporary art in the world.

You’re talking about a malleable socio-political structure. For how long do you think you can do this kind of work in Vietnam?

I don’t know about the future. I feel more freedom to work here because of this open structure. Freedom depends on interpretation. People in America might not think its freedom; we have a problem of things being too black and white. Perhaps the experiences of daily life in Vietnam is not good—the pollution, the education, the relationship between people; but actually, ironically, it could be the space where art can happen.

The original interview is here 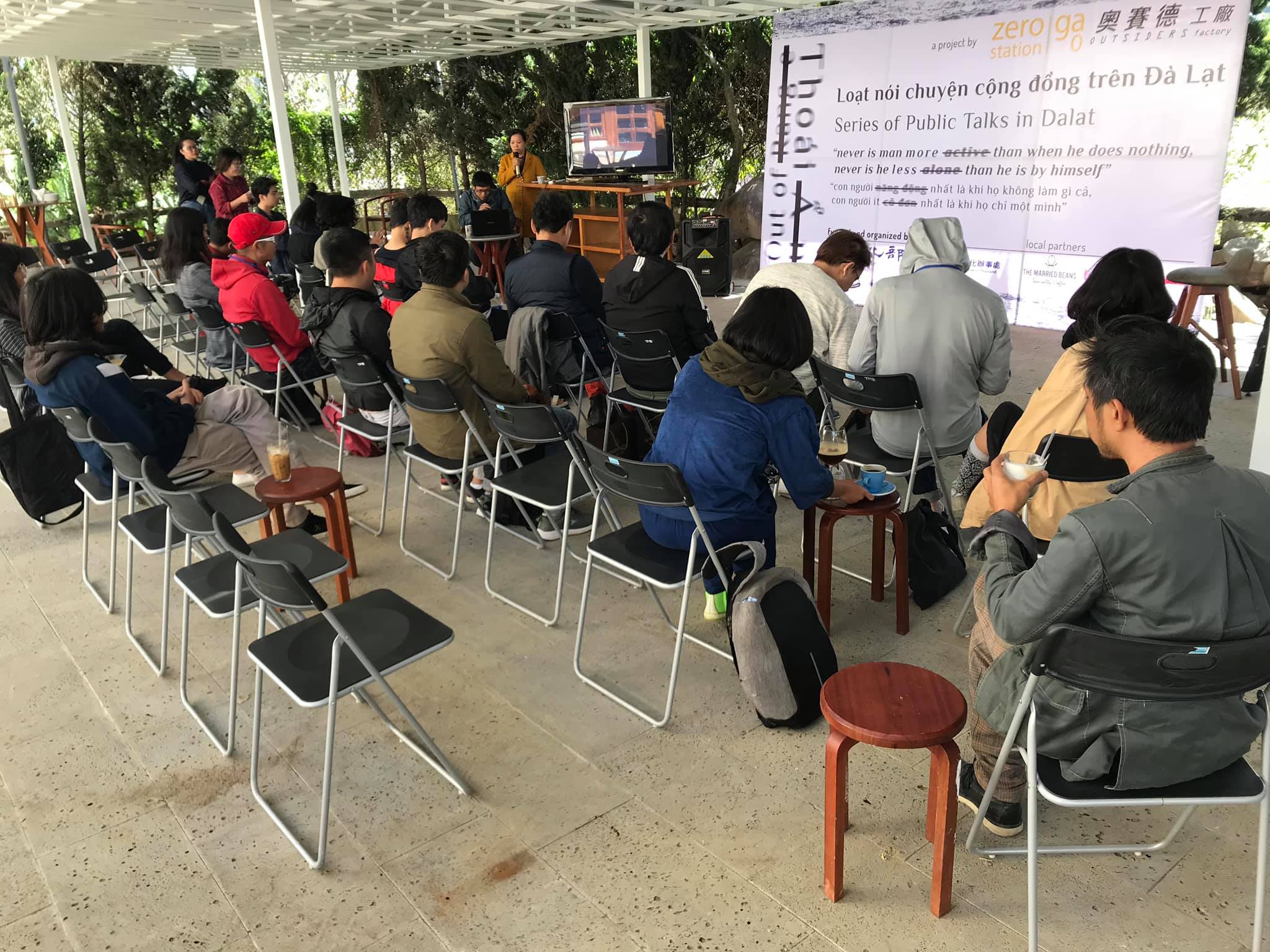